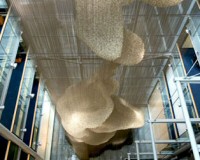 Description: Thomas Heatherwick was commissioned to create this major work for a spectacular 30-metre-high vertical void in the NW corner of our new international headquarters on Euston Road. The work towers seven storeys of the building at a busy intersection between Euston Road and Gower Street, and can be easily viewed by passers-by.

Consisting of 150,000 specially processed glass spheres, suspended on almost one million metres of fine stainless steel wire, the sculpture glows with a constantly shifting rainbow of colours. This effect was created through a unique process of sandwiching reflective 'dichroic' film within the glass.

The form of the sculpture has been derived, through the use of 3-D computer modelling, from the twisted shape of a drop of molten metal, which cooled and solidified as it fell through tumbling water. The aim was to produce a sinuous, curvaceous form with variety, so that it would look different from each of the building's nine floors.

The three-month installation process involved the work of an international team, which included an architect, students, designers, an art historian, a construction manager, a photographer and a rally driver.

Bleigiessen 'lead-guessing' is a New Year's Eve activity in central Europe. Lead is poured into water, producing extraordinary shapes from which your fortune can be predicted for the coming year.

Says Thomas Heatherwick, The name 'Bleigiessen' seemed particularly apt, because the future of the Wellcome Trust is being invested in its new building.