The Demon Barber of Fleet Street 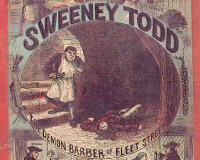 This is where Demon Barber Sweeney Todd had his shop.

Description: This is where Sweeney Todd, the demon barber of Fleet Street, had his shop and is believed to have robbed and murdered over 150 customers, thereby making him the number one serial killer in British history.

Sweeney was born on 16th October 1756 in Brick Lane, then a rural country lane that led out to the brickfields of Bethnal Green. Todd's mother was a silk-winder and his father a silk weaver, working for the French Huguenots in nearby Norton Folgate, Spitalfields.

In 1770, aged only 14 years, Sweeney Todd was sentenced to a five year term in Newgate Prison wrongly accused of stealing a pocket watch. While in prison he met up with an old barber named Elmer Plummer, who was serving ten years for fraud. Plummer took a liking to young Sweeney and taught him how to cut hair and shave, and how to pick pockets of the customers, Sweeney was a keen learner and soon became Plummer's apprentice boy, lathering-up and shaving some of the prisoners who could afford their services.

After his release in 1785, with a few pounds he had stolen at work in the jail, and with the little knowledge of haircuts he gained, Sweeney Todd opened his Barber Shop here at 186 Fleet Street, next door to St Dunstan's Church, just a few blocks away from the Royal Courts of Justice.

The shop stood at the side of the narrow alleyway named Hen and Chicken Court, at the corner of Fetter Lane.

Todd would lure his victims in for a shave and slit their throats before chopping them up and dumping them under the building. When the smell became noticable his lover got rid of the flesh by making pies of them and selling them in a shop nearby.

1» I am enjoying this site but Im afraid Sweeney Todd is a fictional character. A good yarn but as true to life as Batman. (Tim)
Posted by Tim on 2011-11-20