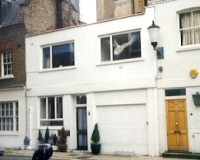 Judy Garland's final home and place where she overdosed.

Description: This is where Wizard of Oz actress Judy Garland (1922-1969) died following an accidental overdose of sleeping tablets in the bathroom here on June 22nd 1969. It was less than 3 months after she had married for the fifth time, this time to Mickey Deans.

Mickey Rooney says the world was too late to understand and love Judy Garland. If they could have taken her to their hearts a little sooner, she might still be alive today. said Rooney, a child star with Miss Garland at Metro-Goldwyn-Mayer and later her co-star in the Andy Hardy series.

2» I and my partner visited Judys last home and felt very upset as the property was derelict and its such a huge shame that the plaque had been removed. A true superstar and we showed no respect for her. (David Smith)
Posted by David Smith on 2010-03-29
1» I visited 4 Cadogan Lane today but didnt see a blue plaque on the place. Did I read somewhere that the current owners did not want a plaque because they would get a lot of people viewing the property? Would love to know. (Ann Thomas)
Posted by Ann Thomas on 2007-12-27