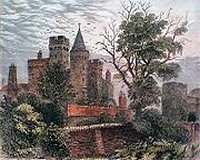 The site of Sir John Vanburgh folly of a fortress

Description: This is a fortress-like folly built by Sir John Vanburgh, or Vanbrugh, the architect and dramatist, for his own occupation when he succeeded Sir Christopher Wren as Surveyor to the Royal Naval Hospital in 1719.

This castle-style mansion is the only survivor of a group that Vanbrugh built around it for other members of his family.

Sir John lived here from 1719 to 1726, as attested by a blue plaque outside. The castle is modelled on the French Bastille, where Vanbrugh was imprisoned on charges of spying for the British in 1690-92.

In modern times the building was until 1975 a school run by the Royal Air Force Benevolent Fund for the sons of RAF personnel killed in service; it was restored by the Blackheath Preservation Trust in 1977 and is now converted into maisonettes.

Vanbrugh died in London not here, but he did write his own epitaph:

'Lie heavy on him earth, for he
Laid many heavy loads on thee.'

2» The teachers were sadists!!!! and homosexuality was rife!!!! amongst 7 to 12 yr olds??? You are off your trolley old boy and need a bit of help. Granted JHC was an arse but that was about it! (Ash)
Posted by Ash on 2011-06-12
1» The most disgraceful school of modern times. The teachers were sadists more interested in beating the boys than teaching and homosexuality was rife. (Geoff)
Posted by Geoff on 2011-05-08