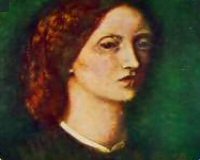 This is where Dante Gabriel Rossetti opened his wifes coffin.

Description: This is the site of Rossetti's grave and that of his dead wife Elizabeth (Lizzie) Siddall.

When Lizzie died from an overdose of laudanum in 1862, Dante was so grief stricken he buried a grey calf-bound handwritten volume of his own unpublished poems.

Seven years later he returned here in the dead of night to retrieve the book which had been partially eaten by a worm to publish them with new poems before he joined Lizzie here in this plot.

The story goes that Lizzies infamous long red hair (see Millais' painting Ophelia) had continued to grow and was after 7 years dead in great condition.

Manson and the Talgarth Hotel», 5.8km

The Field of Forty Footsteps», 3.1km