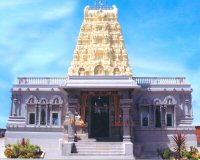 Description: The entrance to this Sri Murugan Temple is below an ornate 52 foot tower and opens to a spacious spiritual haven. Polished granite tiles from India cover the floor and reflect the light carefully designed to fall delicately around the deities adorned with glowing lamps, fruits and flowers.

The central granite shrine belongs to Lord Muruga, one of the two sons of Parvathi and Shiva. His brother, Ganesh, is on his right, and father Shiva on his left.

The stories of these deities are recorded in the Vedas, ancient Indian texts which have been revered on the subcontinent for around 8,000 years.

The shrines are carved from black granite shipped from India, the intricate designs crafted by traditional Hindu stonemasons who have beautifully sculpted the many forms of each deity on the outer walls of the shrines which tower through the ceiling to represent the meeting of mortal and divine.

Hinduism holds a belief in one supreme god, a formless god who can appear in various forms as saints, sages, devotees and in dreams, and therefore concedes the existence of several deities.

Lord Muruga is worshipped as the sole supreme lord who holds the three aspects of the holy trinity, Brahma, Shiva and Vishnu.

The many faces of the supreme Being are manifested in deities housed in several small shrines in the marble walls of the temple. Each deity has a time when it is especially revered, for Puja (ritual worship), and the devoted pray to the different deities to assist them with their changing needs.

British architect Terry Freeman worked on the construction with a team of Indian experts to build this traditional Indian building according to British planning law.

The seed for a temple was first sown in 1975 by a group who realised the religious and cultural needs of the Tamil-speaking Hindu community, and formed a congregation who acquired the site in Church Road 22 years ago.

A temporary temple served, while plans were drawn up and Â£3.5 million was raised to build the traditional south Indian temple dedicated to Lord Muruga in east London. 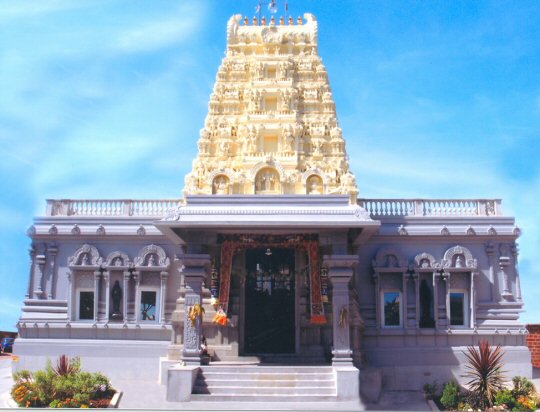 4» This is a great place, to do our poojas, but it aint free. We have to chip in to pay for unkeep of this place. (kavin robert)
Posted by kavin robert on 2010-03-22
3» It would be nice to have a Photo Gallery of all the shrines in the Mandir. Regards - Shashi Bailoor. (Shashi Bailoor)
Posted by Shashi Bailoor on 2009-11-04
2» Wish a Murgan Temple can be built in Leicester soon!!!!!! (Gayatri Johnston)
Posted by Gayatri Johnston on 2008-08-16
1» The temple has a feeling of spirituality and devotion, my heart felt congratulations to all those who have made this temple possible and continued success now and into the future. (Sir Radhakrishna Murugan, KOJ)
Posted by Sir Radhakrishna Murugan, KOJ on 2008-06-01

The Congregation of Jacob», 5.3km

Miracle at the Vishwa Temple», 18.km

Buddhism at home in London», 14.km