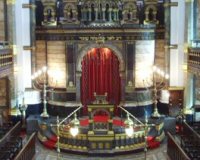 One of the most beautiful synaogues in Britain.

Description: The New West End Synagogue in St Petersburgh Place, Bayswater is one of the oldest and beautiful synagogues in London and, indeed, in the country. The synagogue, which is a constituent of the United Synagogue (Orthodox), serves the Jewish communities of Bayswater, Notting Hill, Kensington, Hammersmith and West London. In recent years it has enjoyed a major communal renaissance under the leadership of Rabbi Geoffrey Shisler and his wife Anne.

The Foundation Stone of the New West End Synagogue was laid on June 7th. 1877 by Mr. Leopold de Rothschild in the presence of the Chief Rabbi, Dr. Nathan Marcus Adler, and the building was formally opened on March 30th. 1879.

The Synagogue's treasures include some twenty Sifrei Torah, as well as superb examples of embroidery and silver, some dating back to the early eighteenth century; some of the Torah bells and breastplates which are not in regular use are on loan for display at the Jewish Museum.


The Congregation of Jacob», 5.8km

Buddhism at home in London», 5.6km

Miracle at the Vishwa Temple», 8.1km