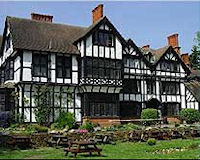 Description: In 1972 the London Hare temple, which was then at Bury Place near the British Museum, was getting much too small for the growing interest.

Beatles guitarist George Harrison, feeling sympathetic towards the devotees, decided to ask a British devotee, Dhananjaya das, to choose a large property not too far from London.

Several properties were investigated, but finally they settled on Piggot's Manor in Aldenham, near Watford, which has now been renamed as the famous Bhaktivedanta Manor.

The relationship between Shrila Prabhupada and George Harrison was very close, and Shrila Prabhupada regarded George as his son. George lived here for a while and when Bhaktivedanta Manor was donated, Shrila Prabhupada said of George, Because he has given shelter to Krishna by providing this temple, Krishna will surely provide shelter for him.

Miracle at the Vishwa Temple», 9.5km