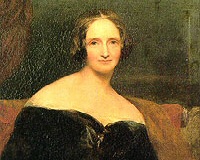 Description: After nearly 200 years the world in general and the literary world in particular are still slightly surprised that a woman of only eighteen managed to write a rich and mature novel like Frankenstein.

But Mary was no ordinary girl. Being the daughter of the radical and still famous Mary Wollstonecraft (who died soon after her birth) and the often-nearly-forgotten philosopher William Godwin (illustrious author of Caleb Williams) she was always surrounded by people from literary circles and finally eloped with one of them, the strange but talented Percy Bysshe Shelley.

In Italy she wrote her Frankenstein or The Modern Prometheus, finishing it on April 17, 1817. Her father read the book in November of that year and he was highly impressed, which was certainly against his habit when it came to books. Frankenstein was published on March 11, 1818 without revealing the name of it's author and soon became a success. After Shelley's death in 1822 Mary stayed for a while in Italy in the neighbourhood of Lord Byron, before returning to England in 1823. There she raised their only surviving son Percy Florence and wrote poems (like The Choice), books and essays. The Last Man (1826) is a frightening account of a new plague eating away mankind.

Mary Shelley bought this place and died at age 53 in her home at Chester Square, London, on February 1st 1851.