Home of the Tichborne Claimant 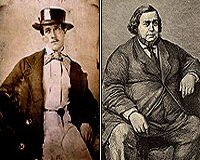 This is where the Tichborne claimant lived during his trial.

Description: This is where Arthur Orton (of Wapping), also known as Sir Roger Charles D. Tichborne, the infamous Tichborne Claimant lived during the height of his trial and infamy.

Sir Roger was said to have died, when his ship went down on his return from Rio, and was declared dead a year later. His mother refused to believe it, and sent requests around the world for information. And information came from Australia that he was living as a butcher. She sent money for him to return, and he arrived in London on Christmas Day 1866 and visited the Tichborne estates.

After Lady Tichborne's acceptance, various other acquaintances of Sir Roger accepted him as well. Other members of the Tichborne family were not so gullible and promptly declared him an impostor. Their investigators found out that this Tom Castro was a butcher's son from Wapping and had jumped ship in ValparaÃ­so, Chile, where he had taken the name Castro from a friendly family.

A massive trial ensued and he was eventually found guilty of perjury and sentenced to 14 years, of which he served 10.

Several films were made of the story, including an episode of the Simpsons.

The Royal Courts of Justice», 3.4km