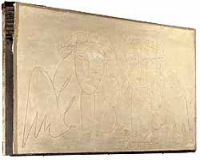 The place where Picasso painted his only piece in Britain.

Description: Bernals Picasso mural is named after Professor John Desmond Bernal, who threw a party here at his Torrington Square flat for stranded peace delegates. A delegation including Pablo Picasso were on their way to Sheffield in 1950 when they couldnt get there.

Bernal was an eminent Irish scientist who worked on x-ray crystallography and took the first x-ray photographs of protein crystals, but was equally famous for his political beliefs. He offered to host a party for the delegates and Picasso made this mural on his wall.

Bernal chiselled out the mural and presented it to the ICA in 1969, when the Bloomsbury flat was due to be demolished. It is now part of the Wellcome Collection.

Banksy Off His Trolley», 1.0km