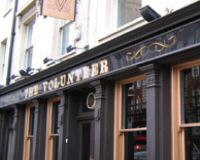 Ghost of Richard Neville wanders around in surcoat and breeches

Description: The pub occupies the remains of the Neville (important mob back in the day - Dukes of Norfolk and that kind of thing) family mansion that was burned down in 1654. The only problem with this placing is that the pub's cellars are also the mansion cellars - and the ghost of Richard Neville, who wanders around in surcoat, breeches and fancy stockings, doesn't seem to take too kindly to this fact.