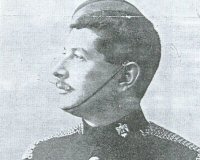 This is where the Houndsditch murders occurred.

Description: On 16th December 1910, a gang of Latvian revolutionaries attempted to break into the rear of a jeweller's shop here from the cul-de-sac behind. An adjacent shopkeeper heard their hammering, informed the City of London Police and nine unarmed officers - three sergeants and six constables (two in plain-clothes) - converged on the Exchange Buildings.

The two sergeants entered the house and became aware of a man standing in the darkness at the top of the stairs. After a short conversation, another man entered through the yard door, and both started shooting.

Both officers were hit, with Bentley collapsing across the doorstep, while Bryant managed to stagger outside. In the street, constable Woodhams ran to help Bentley, but was himself wounded by one of the gang firing from the cover of the house, as was sergeant Tucker, who died almost instantly.

The gang then attempted to break out at the bacl, leader George Gardstein being grabbed by Constable Choate almost at the entrance. In the struggle Choate was wounded several times by Gardstein, before being shot five more times by other members of the gang, who also managed to hit their compatriot in the back. They then dragged Gardstein three-quarters of a mile to 59 Grove Street, where he died the next day.

Constable Choate and Sergeant Tucker died in separate hospitals the same day. An intense search followed, and a number of the gang or their associates were soon arrested.

In January The Siege of Sidney Street brought the whole episode to an end.