The Siege of Sidney Street 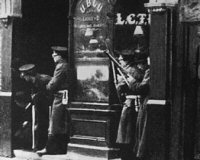 This is where the Siege of Sidney Street took place.

Description: On 2 January 1911, an informant told police that two or three of the Latvian revolutionary gang who escaped after the murders of 2 Sergeants (the Houndsditch murders), possibly including Peter the Painter himself, were hiding here.

Worried that the suspects were about to flee, and expecting heavy resistance to any attempt at capture, on 3 January two hundred men cordoned off the area and the siege began. At dawn the battle commenced.

The defenders, though heavily outnumbered, possessed superior weapons and great stores of ammunition.

The Tower of London was called for backup, and word got to Home Secretary Winston Churchill, who arrived on the spot to observe the incident first hand, and to offer advice. Churchill authorised calling in a detachment of Scots Guards to assist the police. Six hours into the battle, a fire began to consume the building. When the fire brigade arrived Churchill refused them access to the building.

The police stood ready, guns aimed at the front door, waiting for the men inside to attempt their escape. The door never opened.

Inside the remains of two members of the gang, Fritz Svaars and William Sokolow (both were also known by numerous aliases), were recovered. No sign of Peter the Painter was ever found. 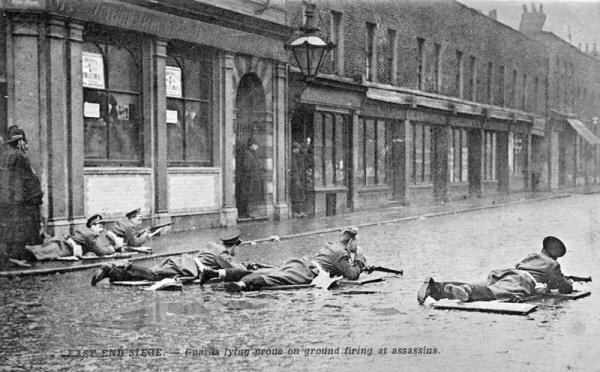 The Siege of Sidney Street», 0km