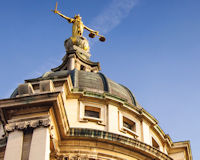 The most famous criminal court in the world.

Description: Known as the Old Bailey, the Central Criminal Court of England and Wales, is one of a complex of courts and buildings here housing the Crown Court.

Outside look up 60m at the statue of Justice (3.7 metres high), cast in bronze and covered with gold leaf. In her right hand she holds the sword of retribution and in her left the equally balanced scales of justice. Not she is not blindfolded like ?other statues of Justice.

All the courthouses have been built on the line of the Roman City wall, a section of which is still preserved in the basement of the present building.

Completed in 1785, the Old Bailey, named after the street besides the notorious Newgate Prison, soon became popular as the scene of hanging of those sentenced to death.

The last beheading in the country took place outside the prison here in 1820.

A second courtroom was added in 1824 and 10 years later, an Act of Parliament extended the Central Criminal Court jurisdiction beyond the City and Middlesex to include parts of Essex, Surrey and Kent and to British ships on the high seas.

By the end of the century, more expansion work was needed and architect Edward Mountfords design was to complement the nearby dome of St Pauls Cathedral. The first stone of the new Old Bailey was laid in 1902, and five years later the building, with four courts, 90 cells and stones from the demolished prison used in its faade, was completed. It cost the City of London Corporation nearly 400,000 and was opened in 1907 by King Edward VII.

After world war II air-raid damage, the building was restored and enlarged and more courts added.

Further work was carried out in the 60s and 70s when an IRA car bomb damaged the building. If you get inside, note the shard of glass on display from this damage.

Quakers William Penn and William Mead were tried here (there is a plaque inside). The jury's refusal to convict them led to the establishment of the right of juries to give a verdict according to conscience.

Among the famous trials are those of Oscar Wilde, Dr Crippen, William Joyce ('Lord Haw Haw'), John Christie, the Krays and Peter Sutcliffe, the 'Yorkshire Ripper'.

Modern culture saw it demolished in V for Vendetta and also seen in A Fish Called Wanda, Witness for the Prosecution, Justice League and Law & Order.

The Royal Courts of Justice», 0.5km