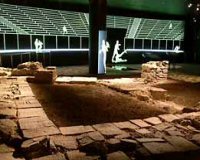 This is where London's gladiators once fought.

Description: In 1988 Museum of London archaeologists discovered a Roman amphitheatre here - London's only one ever discovered.

The Romans arrived around AD47 and the 2 small hills of St Pauls & Leadenhall were selected as sites for a new town.

St Augustine in the 4th Century describes a visit to a London Roman amphitheatre made by his friend Alypius:

...the whole place was seething with savage enthusiasm, but he shut the doors of his eyes and forbade his soul to go out into a scene of such evil. If only he could have blocked up his ears too. For in the course of the fight some man fell; there was a great roar from the whole mass of spectators he was overcome by curiosity and opened his eyes, feeling perfectly prepared to treat whatever he might see with scorn and to rise above it ... He saw the blood and he gulped down the savagery ... drunk with the lust of blood. He was no longer the man who had come there but was one of the crowd to which he had come.

Following dismantling and abandonment in the 4th century the site of the amphitheatre lay derelict and empty for hundreds of years. It was only in the mid 11th century that pressure on space in bustling Saxon and Norman London led to the reoccupation of the area.