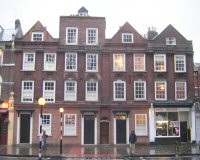 Description: These splendid big houses are London's oldest surviving brick terraced houses built in 1658, before the Great Fire and are, unsurprisingly, Grade I listed.

1658 is cut into the brickwork of number 54. It is amazing that they survived the V2 devastation in the area during World War II.

At some point in their history they were converted to shops and in recent years English Heritage has advised on the work to transform numbers 53-55 back to houses. The leases were sold and they now are private residences again.

The Nose in Admiralty Arch», 3.5km