Birth of The Small Faces 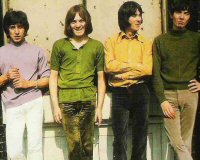 This is where Don Arden of The Small Faces fame worked.

Description: On the 8th September 2007 a commemorative plaque was unveiled here dedicated to Don Arden and Small Faces was unveiled at 52-55 Carnaby Street, Arden's former offices.

Kenney Jones ex-drummer of Small Faces said To honour the Small Faces after all these years is a terrific achievement. I only wish that Steve Marriott, Ronnie Lane and the late Don Arden were here to enjoy this moment with me.

The Small Faces are best known for the hit single Itchycoo Park.

Arden is also credited with steering bands ELO and Black Sabbath to stardom.

X-Factor judge Sharon Osbourne (wife of Ozzy) became estranged from her father after fighting him for control of husband Ozzy Osbourne's career, but the pair were reconciled in 2002.