The Oldest Bank in London 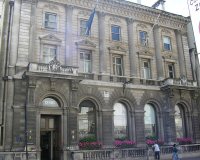 This is the oldest bank in London, Child's Bank since 1671.

Description: Child's bank, opposite the Temple Bar Memorial, is probably the oldest bank in London dating back to at least 1671.

It was the model for Tellson's Bank in Dickens' Tale of Two Cities.

The existing building dates from 1877.

The gateway just beyond leading to Middle Temple Lane was designed in 1684, apparently by Roger North (1653-1734), the author of The Gentleman Accomptant (1714) (although an inscription claims Wren as the architect).

Back in the 1660's it was a time of great upheaval in London, with the Great
Plague of 1664-5 and the Great Fire in 1666, the firm thrived. In around 1664, Blanchard took Francis Child into partnership in the business.

It was at this time that the firm adopted the sign of the Marygold as its trade sign â a device of great significance for a business in the days of widespread illiteracy. The Marygold has remained the bankâs symbol ever since.

The name Child comes from Francis Child, who entered into partnership with Robert Blanchard. After Child married Blanchard's step-daughter, he inherited the whole business on Blanchard's death. Renamed Child and Co, the business thrived, and was appointed the jeweller in ordinary to King William III.

After Child died in 1713, his three sons ran the business, and during this time, the business transformed from a goldsmith's to a fully fledged bank. Its first bank note was issued in 1729.

By 1782, Child's grandson Robert Child was the senior partner in the firm. However, when he died in 1782 without any sons to inherit the business, he did not want to leave it to his only daughter, Sarah Anne Child, because he was furious over her elopement with John Fane, 10th Earl of Westmorland earlier in the year. To prevent the Earls of Westmorland from ever acquiring his wealth, he left it in trust to his daughter's second surviving son or eldest daughter. This turned out to be Lady Sarah Sophia Fane, who was born in 1785. She married George Child-Villiers, 5th Earl of Jersey in 1804, and upon her majority in 1806 she became senior partner. She exercised her rights personally until her death in 1867. Ownership continued in the Jersey family until the 1920s.

2» "the firm adopted the sign of the Marygold as its trade sign a device of great significance for a business in the days of widespread illiteracy. The Marygold has remained the banks symbol ever since" The device is a mar4igold, nt a marygold. It is nonsense to say that the device was important due to widespread illiteracy. Most people, including servants and apprentices, were literate in London in those days. And if they were not additionally able to write, they would not be able to use a bank, would they? Shop signs were like pub signs are now, and were not a sign of illiteracy. For statistics on literacy see, for example "Popular culturesw in England 1550-1750" by B Reay, 1998,(pp. 40-41) and "Literacy and the Social Order: Reading and writing in Tudor and Stuart England" by David Cressy, 1980. (Charles Reese)
Posted by Charles Reese on 2011-10-05
1» Childs was a jeweller until the 18th century, not a bank, and it has not existed since 1923. In that year the company was taken over and became a branch of Glyn, Mills. The oldest bank in England is just a few doors down from Childs at number 37 Fleet Street. It is C. Hoare & Co., which is still wholly owned by direct descendents of Richard Hoare, who established it in 1672. It is still an unlimited liability company. (Charles Reese)
Posted by Charles Reese on 2011-10-05