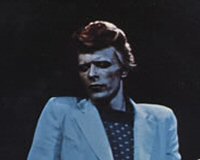 This is where David Bowie lived and painted everything black.

Description: This is where rock legend David Bowie lived in 1973-1974. It was at the time of the coal miners strike, and David wanted to know what it would be like living in a coal mine, so he painted all the interior of the house totally black (walls, ceilings, t.v. furniture etc.)

This is where Bowie was infamously found in bed by his wife with Rolling Stone Mick Jagger.

A Distinctive Tune in Tooting», 3.9km