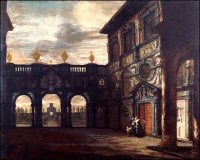 Description: This is 700-year-old Denham Court, Bucks, where the future Charles II is said to have hidden during the Civil War.

The county council took over the house in the 1930s after it fell into neglect and 20 years later it was turned into a young offenders' home. It's now a golf course.

It rose to fame as the place where the only painting in existence of the house that Rubens built, was used as a dartboard by young offenders for years.

This Flemish picture has, quite literally, suffered the slings and arrows of outrageous fortune. Now the painting, which was almost more holes than canvas by the time it was removed, has been restored. Yesterday, research unveiled at the National Gallery showed the picture to be of startling significance: it is the first known painting of the artist Peter Paul Rubens's house in Antwerp, and the only true record of how he decorated it.

Dr Susan Foister, of the National Gallery, said: Nobody knew the importance of the paintings then. It wasn't the sort of place where the paintings were the priority and I don't think there were many art historians in there.

The tattered pictures were rescued in 1987, shortly before the institution was closed - Denham Court has since been sold off and turned into a golf course. They were taken into the care of Buckinghamshire County Museum, in Aylesbury.

The picture of Rubens's house was restored and tentatively identified, but it has remained in storage ever since.

Its true significance and the artist, probably the minor Flemish painter Anton Gunther Gheringh, has only come to light as part of a groundbreaking National Gallery project carried out by 25 researchers to investigate the history of 8,000 little-studied paintings in 200 regional galleries.

Rubens, a court painter to Charles I of England, died in 1640. Although Gheringh's picture has been dated to between 1645 and 1675, the three figures by the front door are thought to be Rubens, his wife and daughter. The lavishly painted friezes and pilasters on the house are believed to have been done by Rubens himself, or at least by his pupils on his instructions.

The house, which has been converted into Rubenshuis, one of Antwerp's most prominent art galleries, fell into disrepair early last century. An attempt to restore it to its former glory had to follow two black and white engravings from the 1660s which showed none of the decoration or colouring. 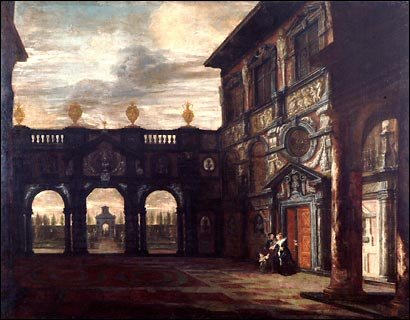