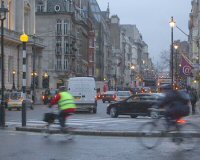 Description: This is where London's first traffic island was built in 1864. It was funded by one Colonel Pierpoint who was afraid of being knocked down on his way to (and more likely from) his Pall Mall club. When it was finished, the good colonel dashed across the road to admire his creation and was unceremoniously bowled over by a cab!

The World's First Ever Cashpoint», 10.km