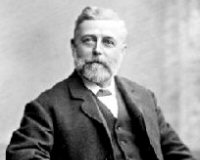 Description: Thomas Crapper (1836-1910) died here and was buried in Elmers End cemetery. He had lived for the last thirteen years of his life here but the house bears no blue plaque, because the Historic Buildings Committee of
the Greater London Council was not persuaded on 22 November 1979 that he had made an
important contribution to human sanitation.

The British royal family took over Sandringham House in Norfolk in 1861, and refurbished it in the 1880s. Queen Victoria was sufficiently impressed by Crapper's reputation that he was invited
to install the drains and probably the plumbing, including some thirty lavatories with cedarwood seats and enclosures, and so it was that the flower beds at Sandringham and at Park House next door, where Princess Diana was born are filled with Crapper manhole covers, and the syphon became a royal flush!

Crapper manhole covers can be found all over the UK; there is even one in Westminster Abbey, in the cloisters near the deanery - and is apparently popular for brass-rubbings.

Crapper became caught up in the myth, probably not helped by his surname, that he invented the flush toilet. He didn't, but he did contribute to several patents and improvements in the field of water closet efficiency. 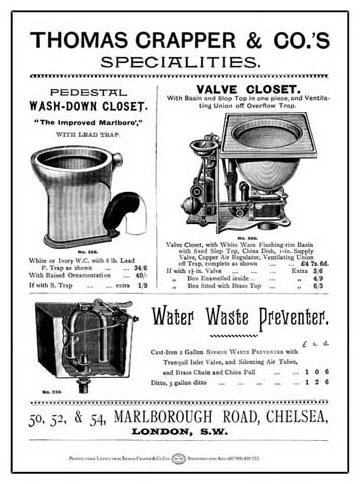 The World's First Ever Cashpoint», 14.km