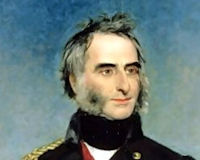 This is where polar explorer James Clark Ross lived.

Ross is best known for discovering the north magnetic pole and performed other important magnetic surveys in the Arctic and Antarctic on an expedition funded by the gin manufacturer Felix Booth in 1831.

He also commanded an expedition to the Antarctic with his uncle from 1839 through to 43 discovering the Victoria Land region of Antarctica. They discovered the Ross Sea and Ross Island, naming its two volcanoes Mount Erebus and Mount Terror after the expedition's ships.

He also led the 1848-49 search for Sir John Franklin after his excursion in search of the Northwest Passage in the Canadian Arctic.

Ross was awarded the Gold Medal of the Socit de Gographie in 1843, elected to the Royal Society in 1848 and knighted in 1844.

Ross married Ann Coulman and settled down to private family life. Over the next five years he wrote an account of his expedition, Voyage of Discovery and Research in the Southern and Antarctic Regions During The Years 183943.

The shop of Ignatius Sancho», 6.9km