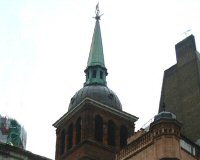 This has a good claim on being the oldest church in London.

Description: An inscription in the churchyard here claims that the church of St Peter upon Cornhill is the earliest Christianised site in Britain, founded by the first Christian King, Lucius in 187.

However there is no solid archeological evidence of any Christian church in the UK during Roman times.

But! The Welsh version of King Lucius, Llewrug Mawr is mentioned in Liber Pontificalis (c. 685) - Bede mentions the legend of the founding of St Peter upon Cornhill in the Historia ecclesiastica gentis Anglorum (731).