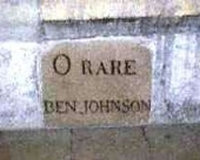 The only person to be buried at Westminster Abbey upright!

Description: Ben Jonson (1573-1637), dramatist and poet, is the only person buried in an upright position in Westminster Abbey.

He fought with the English troops in Flanders and on returning to London he married, but no children survived him. He became an actor and playwright.

In 1598 he killed a fellow actor in a duel but escaped hanging and was imprisoned as a felon for a short time. This incident does not seem to have affected his reputation.

His play Every Man in his Humour included Shakespeare in its cast. Jonson was a well-known writer of masques and a tutor to Sir Walter Raleigh's son. He became Poet Laureate in 1619 (although it was not a formal appointment).

A monument to Jonson was erected in about 1723 by the Earl of Oxford and is in the eastern aisle of Poet's Corner.