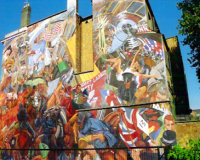 One of the best loved anti-fascist murals in London.

Description: The Cable Street mural was painted to celebrate the victory against fascism and the Blackshirts on 4th October 1936.
This became known as the Battle of Cable Street. A march by Sir Oswald Moseley's fascist supporters was opposed
by many groups and rioting broke out, the worst concentrated on Cable Street. The distrubances led Parliament to pass
the Public Order Act 1936, which empowered police to ban demonstrations

The mural was planned in 1979 and took a year to design and paint, it was completed in 1981. The mural was painted by Ray Walker, Paul Butler and Desmond Rochfort. Dave Binnington had originally planned and researched it but quit after the his early work was destroyed vandals. When they were planning the design for the mural the artists carried out historical research into the events that took place at the battle of Cable Street by looking at books, photographs and films about the event.

It's on the side of St. George's Hall. 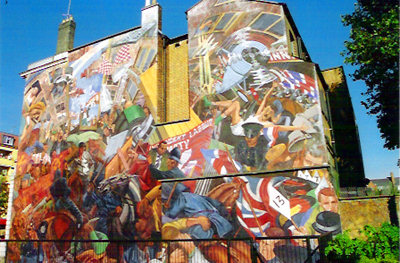 1» The mural was in fact painted by Ray Walker, Paul Butler and Desmond Rochfort. Dave Binnington had originally planned and researched it but quit after the his early work was destroyed by fascist vandals. It took Ray, Paul and Desmond a year to design and paint and it was completed in 1981 (not 1993) it has been attacked quite a few times since, most recently in 1994 and when Paul Butler was repairing it his car had white paint poured over it, its tyres slashed and his life was threatened - the fascists havent gone away! But the mural remains a potent symbol evidently! (paul butler)
Posted by paul butler on 2009-10-28

The Courtauld Institute of Art», 2.4km