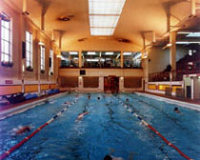 The Turkish Baths of the bloody scene from Eastern Promises.

Description: Ironmonger Row Baths were built as a public wash house and later upgraded to Turkish Baths. The baths were designed by architects AWS & KMB Cross, and built in 1931. They are now managed by Aqua Terra Leisure.

The baths include a steam room, a series of three hot rooms of varying temperature, marble slabs for massage and body scrubbing and an icy plunge pool. In addition there are two relaxation areas.

As of February 2007, the sessions on Mondays are mixed-sex; other days are single-sex.

The swimming pool is slightly over 30 metres long. There is a small sauna next to the pool. There is also a well equipped modern gym located within the building.