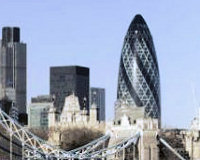 This is the Swiss Re, Gherkin, or plain 30 St Mary Axe.

Description: This groundbreaking design is widely known by the nickname The Gherkin, and occasionally as a variant on The Swiss Re Tower, after its previous owner and principal occupier.

It is 180 metres (591ft) tall, making it the second-tallest building in the City of London, after Tower 42, and the sixth-tallest in London as a whole.

The building was designed by Pritzker Prize-winner Lord Foster and ex-partner Ken Shuttleworth and Arup engineers, and was constructed by Skanska of Sweden between 2001 and 2004.

The building is on the former site of the Baltic Exchange building, the headquarters of a global marketplace for ship sales and shipping information. On 10 April 1992 the Provisional IRA detonated a bomb close to the Exchange, severely damaging the historic Exchange building and neighbouring structures.