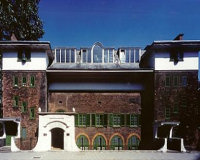 Description: This is the house where the Nancy and Oliver School is being filmed for the BBC show I'd Do Anything's search for west end stars for Oliver!

Mary Ward House is a fascinating Grade 1 listed building built in 1898 and financed by the wealthy philanthropist Passmore Edwards. Mary Ward, the novelist and social reformer, was the inspiration behind the endeavour to provide a centre of training, care and entertainment for the less fortunate in society.

The Dickens library at Mary Ward House was recently transformed to look like a classroom at Yale and used for filming of The Good Shepherd featuring Angelina Jolie and Robert De Niro.

A recent epsiode of the BBC 1 hit show Spooks was filmed at the house and broadcast last November.

The House Dr has also used the house for a new TV show.