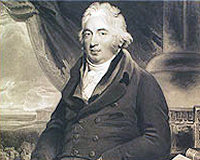 This is where eccentric philanthropist Jack Fuller died.

Description: This is where on the afternoon of Friday, April 11, 1834, Mad Jack Fuller died at his home. He was buried under his Pyramid mausoleum in Brightling churchyard.

It was said that he was buried inside the tomb sitting at a table, complete with bottle of wine at hand and wearing a top hat. Broken glass was strewn across the floor to stop the Devil's footsteps!

Sadly both stories were proven to be untrue when it was necessary to enter the tomb to carry out restoration work many years later.

Jack Fuller (born February 20, 1757 in North Stoneham, Hampshire) was a well known builder of follies, a philanthropist, and a patron of the arts and sciences. He purchased and commissioned many paintings from his friend J.M.W. Turner.

He was also a sponsor and mentor to Michael Faraday.

A large man, living life to the full, he never married but enjoyed supporting good causes and assumed the role of local philanthropist - he paid for the first lifeboat at Eastbourne, and towards the building of the Belle Tout Lighthouse on the cliffs at nearby Beachy Head.


Bodiam Castle is an East Sussex landmark, one of the most beautiful castles in the world. But in Mad Jack's day the castle was in a terrible state, and it was on the verge of being demolished. Until Jack stepped in and saved it by buying it for Â£3000.