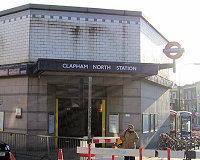 The misfot bomb shelter on the tube network - still disused.

Description: This is the location of the Clapham North deep-level air raid shelter, one of the 8 built across London during World War 2. It was built between November 1940 to 1942 and managed to house over 8000 troops in a labyrinth of tunnels and stairwells 30m underground and over 2 miles long.

Long disused, now Transport for London rents seven for data storage but Clapham North is too damp for data and media. What will become of this shelter?