The Oldest Park in London 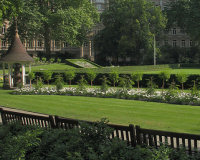 The oldest public park in London, dating from 1606.

Description: Finsbury Circus is the oldest and largest public park and an elliptical square in the City of London, England.

In 1600 the area was raised and planted with trees becoming a public park, the first in London, in 1606.

It was enclosed in 1812 to form a garden laid out in 1815 by William Montague, to the design of Charles Dance the Younger.

In 1862 it was threatened with devastation by the Metropolitan Railway Company and saved by Alfred Smee, who considered it to be one of the most beautiful London squares. In 1900 it was acquired for public use by the City Corporation.

It has an immaculately maintained massive lawn about 80 yards square with a bowls club in the centre, laid in 1904. A bandstand is located nearby.

The garden also features one of the oldest specimen of the pagoda tree; Sophora japonica.

During the second world war a barrage balloon was anchored on the green.

The Birdman of Winchmore Hill», 8.4km

The Museum of Garden History», 2.1km