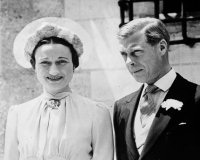 Where Mrs Simpson was living when she began seeing Edward.

Description: This is where the twice-married American socialite Mrs Wallis Simpson was staying when she first began seeing the future King Edward in 1933, and many of her love letters carry the address.

Edward became king when his father, George V, died in January 1936, but abdicated after only 11 months in order to marry Mrs Simpson. He had been advised by the prime minister, Stanley Baldwin, that the British public would not accept his bride as queen. The wedding went ahead in 1937 and the couple became known as the Duke and Duchess of Windsor.

This is not the first time that the couple have been accused of Nazi sympathies. They made a much-publicised tour of Germany in 1937 and were fted by leading Nazis, including Hitler.

After the Duke's death in 1972, the duchess spent most of her life in Paris, where she continued to be shunned by most of his relations. But relations did improve toward the end of her life, and senior members of the Royal Family, including the Queen, attended her funeral in 1986.