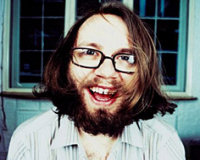 The flat where comedian Daniel Kitson lived, and inspired a show

Description: Daniel Kitson, the hairy comic, produced this show called 66a Church Road for the 2008 Edinburgh Fringe festival. It's a personal piece billed as a break-up show for the longest relationship of his life: that with his old Crystal Palace home. Subtitled A Lament, Made Of Memories And Kept In Suitcases, it has Kitson sitting amid an array of seemingly unremarkable leather cases, as if he'd just moved in.

The metro wrote From sex to the wonders of the sash window, from computer football to cooked breakfasts at his favourite local cafe, his memories are relayed with an enchanting mix of tenderness, humour and observations so steely you could use them to cut a steak.