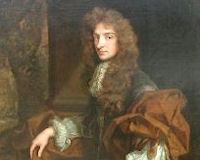 This is where Sir Charles Sedley stripped naked and postured!

Description: In June 1663 three court poets, Sir Charles Sedley, Sir Thomas Ogle and Sir Charles Sackville, later Lord Brockhurst, caused a riot by stripping naked, very indecent posturing at the passing public, and blaspheming from the balcony of the Cock Tavern (which used to be here a long time ago, and not to be confused with the Ye Olde Cock Tavern in Fleet Street).

The crowd attempted to force the door, and being repulsed, drove in the performers with stones, and broke the windows of the house.

For this misdemeanour they were indicted, and Sedley was fined five hundred pounds; what was the sentence of the others is not known.

Yet we will have store of good Wenches,
Though we venture fluxing fort,
Upon Couches, Chairs, and Benches,
To out-do them at the Sport.

Evelyn Lord claims in her book The Hell Fire Clubs that piss bottles were hurled at the crowd as well.

Lucan, Cubitt and some Plumbers», 1.5km