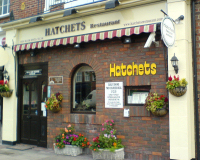 This is where original Nigella domestic goddess Mrs Beeton lived

Description: Mrs Isabella Beeton lived in Hatch End during the 1850âs. She is best known in the context of Mrs Beetonâs Book of Household Management, which carried her name around the world. Two millions copies were sold by 1868. Tips such as early rising and the importance of letting sunlight into the home were devoured by 60.000 would be housewives.

Her involvement in the world of cookery writing did not begin until after her marriage to Sam Beeton, an up-and-coming publisher. She wrote a regular column in one of her husbandâs publications entitled an Englishwomanâs Domestic Magazine. In doing this she realised how little guidance was available for women on the practicalities of running a house. This provided the inspiration for her famous cookbook. Isabellaâs former home is now a successful restaurant called Hatchets.