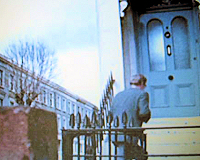 Description: This is the location of Harry Palmer's flat from the 1965 film Ipcress File starring Michael Caine. You'll notice the the blue door has been repainted!

Harry Palmer is a sergeant in the British Army who was court-martialed for running a black market ring in Berlin. He was given the choice of either going to prison or becoming a spy and chose the latter. Assigned to the case, Palmer soon finds himself getting involved in inter-departmental rivalry and at odds with the Americans. He soon comes to realise that he has been chosen because he is expendable.

During the investigation a tape turns up with the word 'Ipcress' written on it. Despite his unorthodox methods Palmer does get results, and he is soon in contact with the man who could be behind the operation.