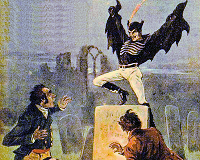 Description: It was here at the house that used to be here at 1 Bearbinder Lane (now Tredegar Road) that the most infamous encounter with Victorian legend Spring Heeled Jack occurred.

18 Year Old Jane Alsop heard an urgent ringing of her door and found a policeman asking for urgent assistance and a candle light. On returning to her front door she discovered it was the infamous Spring Heeled Jack. He attacked her with his metallic claws (sounds like Freddy?) pulling out a clump of hair andcausing some scratches. Her sisters managed to rescue her and close the door, and he persisted in pounding on the door for some time.

Jane and the family reported the incident at Lambeth Magistrates and the police investigated concluding the report was genuine.

Until this point hysteria and myth surrounded London for several years with unknown reliability.

The Chinese Bridge and Pagoda», 4.8km