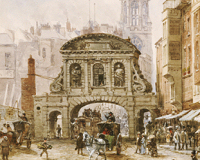 This is where heads and limbs of traitor's were displayed

Description: Temple Bar is the barrier marking the westernmost extent of the City of London on the road to Westminster, where Fleet Street (extending westwards) becomes the Strand.

It was removed in 1878 and rebuilt at Cheshunt, in Theobald's Park, the residence of Sir H. Meux, and in its place, surmounted by the City Griffin, is a statue which includes that of the Queen and the Prince of Wales.

The heads of persons executed for high treason were formerly fixed on iron spikes over Temple Bar. It must have been a chilling sight to people passing under the arch and the last heads exhibited in this way were those of participants in the rebellion of 1745.

This is the limit of the City Corporation's authority, and on State occasions, such as the Diamond Jubilee, it is the privilege of the Lord Mayor to ride out to meet the Sovereign, which Sir Faudel Phillips did on the latest occasion, the Diamond Jubilee.


Credits: The Romance of London, John Timbs, Vol I 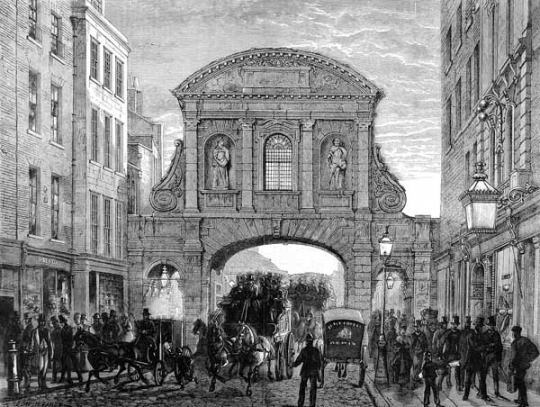 1» Temple Bar is, of course, now recovered from Theobalds Park and is relocated to Paternoster Square beside St Pauls. (Chris)
Posted by Chris on 2008-12-05

Home of the Tichborne Claimant», 3.4km

The Royal Courts of Justice», 0.0km