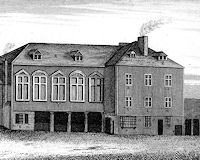 The old debtors prison second only to the Tower of London.

Description: The Marshalsea (13731842) was a notorious prison south of the River Thames known for its incarceration of the poorest of London's debtors.

Run privately for profit it functioned as an extortion racket where debtors who could afford the prison fees had access to a bar, shop and restaurant. They also had the privilege of being allowed out during the day, giving them a chance to pay off their debts. Everyone else was crammed into one of the tiny rooms with dozens of others.

The playwright Ben Jonson, a friend of Shakespeare, was jailed here in 1597 for his play The Isle of Dogs. George Wither, the political satirist jailed for libel, wrote his poem The Shepherds Hunting in 1614 in the Marshalsea.

The prison became known around the world thanks to Charles Dickens, whose father was sent there in 1824, when Dickens was 12, for a debt to a baker. Dickens based Amy Dorrit, whose father is in the Marshalsea for debts so complex no one can fathom how to get him out.

It was largely demolished in the 1870s, although some rooms were retained as shops into the 20th century.

A local library now stands on the site, and all that is left of the Marshalsea is the long brick wall that marked its southern boundary.