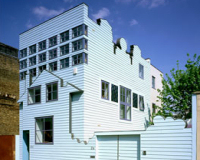 This is one quirky example of great modern London architecture

Description: This quirky building, now affectionately known as The Blue House, has a cartoon-like billboard character which communicates its function as a home and office.

The front has a miniature scale, but the side addressing the main street is big in scale. Built for 300,000, the project makes innovative use of standard construction methods. The house contains a maisonette for family of three, an office and a separate apartment.

The significance of the blue house as one of the most important houses built this century is widely recognised, it features prominently in numerous publications including the new edition of Pevsner's Buildings of England.