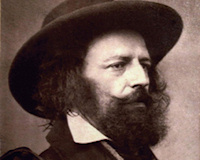 This is where Sir Alfred Lord Tennyson lived as poet laureate.

Description: The poet Sir Alfred Lord Tennyson and his wife came to live in Chapel (or Holyrood) House here in March 1851 until November 1853. He had been appointed Poet Laureate in 1850.

Tennyson had married Emily Sellwood on 13 June 1850 after an intermittent 20 year courtship. His son Hallam was born in Chapel House, and baptised at St Marys Church on 5 October 1852. This son was named after Tennyson's great friend Arthur Hallam who had died tragically 19 years earlier.

He began to find Twickenham too close to London, with too many visitors now that the railway had arrived and eventually moved to the Isle of Wight in 1853.

He also complained of the smell of cabbages in the vicinity!

A prolific writer, who has knocked out numerous columns, scripts, essays and articles, as well as more than 100 songs for the Who, he was attracted to the property mainly because of the small studio house at the end of the 150ft-long walled garden.

An early Georgian townhouse, built in about 1721 with three floors of spacious rooms, all with original pine panelling.

The spectacular main staircase (there are two) is a riot of carved wood and refined curves, but the exuberance in the building is all 18th century.