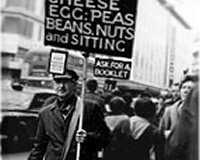 This is where Oxford Street protestor Stanley Green died.

Description: This is where social reformer and Oxford Street eccentric Stanley Green died on 4th December 1993.

From 1968 to 1993, Stanley Green could regularly be seen in Oxford Street campaigning against the dangers of eating protein.

When he died in 1993, the Museum acquired his placards and a complete set of his handprinted booklets Eight Passion Proteins.

Stanley had paraded up and down London's Oxford St for the last 25 years carrying a placard warning against the dangers of lust and passion caused by fish, meat, bird, cheese, egg, peas, beans, nuts and sitting, and selling his leaflets at 12p each.

Until he qualified for his free travel pass, he would cycle the 15 miles from his home in Northolt to Oxford Street, with his placard on his back. He recalled with pleasure that motorists used to toot their horns and wave as they passed, and on occassions, whole coachloads had stood up and cheered him.

Granary Square and its Fountains», 10.km

The Chinese Bridge and Pagoda», 10.km