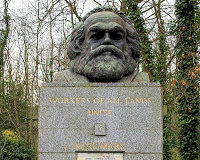 This is the tomb of revolutionary philosopher Karl Marx.

Description: This magnificent grave and tomb of Karl Marx is a Grade I listed building. He was laid to rest here on Saturday, March 17th 1883, in the same grave as his wife, Jenny, who had been buried 15 months earlier.

In his final years, the hugely influential revolutionary thinker and philosopher was in creative and physical decline.

He spent much time at health spas and was deeply distressed by the death of his wife, in 1881, and one of his daughters.