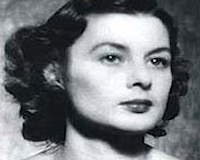 Description: Violette Szabo GC MBE (1921-45) a London-raised secret agent from a French family who gave her life for the French Resistance.

This article below was reproduced from http://www.stockwellnews.com/ subsequently from Home Ground, the community magazine for residents of Hyde Southbank Homes (Summer 2005):

Violette Szabo had an unusual upbringing, She started life as Violette Bushell, born in Paris on 26 June 1921. She was the second child of a Brixton-born father, Charles, and French mother, Reine Blanche. The family moved between France and England for many years and eventually settled at 18 Burnley Road, Stockwell, in 1932. With four brothers, Roy, John, Noel and Richard, Violette was something of a tomboy, climbing drainpipes and scaling walls. Her headmistress, Mrs Clarke, at the local school in Stockwell Road, remembered her for her strong will, sense of leadership and how she vibrated with personality.

At 14, Violette left school and worked as a hairdresser's assistant and later at the Bon Marche department store in Brixton. She was a keen cyclist and swimmer and often went dancing with her friend, Winnie, at the Streatham Locarno and The Swan, Stockwell, which then had a dance hall. Sunday nights they went to The Empress in Brixton which showed films and held 'amateur nights'.

A friend of Violette's brother Roy, Forbes Morgan, still remembers seeing them at the winter fair held at the coach station opposite Lambeth Town Hall. He watched her on the rifle range and saw her on the dodgems having a laugh. He says he can still see Violette and her friend as they went up in the Big Wheel singing at the top of their voices.

It seemed a normal life. But all changed in 1940 when she met Hungarian-born Etienne Szabo, who was a captain in the Free French Army. They married within a few weeks, but their time together was short. In 1942, not long after the birth of their daughter Tanya, Violette's husband was killed in North Africa during the Battle of El Alamein.

Violette was devastated and faced the future as a war widow and single parent. She lived with her parents in Burnley Road, but was determined to do something for the war effort. This was the journey that led her to the SOE, Winston Churchill's secret army, to train as a secret agent and undertake dangerous work in occupied France. Only the finest were chosen, and Violette Szabo was amongst this select group. She was also reputedly the best shot in the SOE. Her spymaster was Leo Marks, who gave her what is now thought of as the definitive World War II code poem.

On 7 June 1944, Violette Szabo was parachuted into France. It was the day after the Normandy landings and her final mission. She was giving covering fire to a French Resistance leader when she ran out of ammunition and was arrested. Despite being brutally tortured by the Gestapo she divulged nothing and was sent to Ravensbruck concentration camp where she was shot in January 1945. She was only 23 years old.

Violette's daughter Tanya accepted the George Cross for her mother in 1946 from King George VI. France also awarded the Croix de Guerre to both Violette and her husband Etienne. In 1958 the film Carve Her Name with Pride brought her world fame. And several books have been written about her.

The Siege of Sidney Street», 4.1km