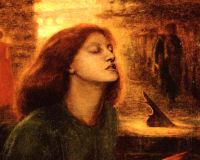 Description: This is where pre-raphaelite muse Lizzie (Elizabeth Eleanor) Siddall was born on 25 July, 1829. Here (before it was renamed, was the familys home at 7 Charles Street, Hatton Garden. She was born to Charles Crooke Siddall, who claimed that his family descended from nobility, and Eleanor Evans, a family of both English and Welsh descent.

At the time of Lizzies birth, her parents were not poverty stricken: her father had his own cutlery-making business. Around 1831, the Siddall family moved to the borough of Southwark, in south London, a less salubrious area than Hatton Garden.

Lizzie was a model, poet and artist who was painted and drawn extensively by artists of the Pre-Raphaelite Brotherhood. Their ideas about feminine beauty were profoundly influenced by her, or rather she personified those ideals.

She was Dante Gabriel Rossetti's model par excellence; almost all of his early paintings of women are portraits of her.

She was also painted by Walter Deverell, William Holman Hunt and John Everett Millais, and was the model for Millais' well known Ophelia (1852).

If Graffiti Changed Anything», 1.3km