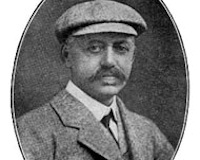 The father of British Summer Time lived and died here.

Description: William Willett's idea came to him while riding on Chislehurst Common one summer morning in 1905.

This grand house here was designed for him by the architect Ernest Newton, and Willett lived here between 1894 and 1915 when he died of influenza.

Here he campaigned strongly for daylight saving measures to be introduced, and wrote The Waste of Daylight - an idea causing controversy at the time and only became law one year after Willett's death in the Summertime Act of 1916.

It suddenly occurred to William Willett that during the Summer most people slept through the first two to four hours of daylight. It just seemed a terrible waste to him.

Born in Farnham, Surrey, in 1856, Willett who is the great-great-grandfather of Coldplay frontman Chris Martin was a builder by trade and gained a reputation for his high-quality housing.