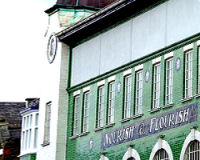 Description: This fab art nouveau former factory is now flats - it was built 1904 and was originally a factory for Frame Foods, who manufactured baby food.

There are still some nice original features inside, including some pictures of how it used to be. The tops of the towers that you mention are apparently called Tiffany twiddles, hence the name of the building now - Tiffany Heights.