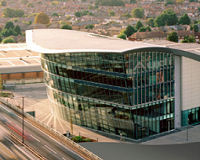 Conceived by Architects Wilkinson Eyre, designers of the Gateshead Millennium Bridge, the vast glass and metal structure is seven storeys high and occupies over 190,000 square feet.

The highly distinctive curved roof is made from aluminium sheets, each one approximately 40 metres in length without any joints.

The basement levels are an engineering marvel. Built below the water table and beneath the River Thames, they house a 32 bay workshop and extensive parking facilities.

Three showroom floors will have space to display 116 cars, while The Audi quattro rooms on floors four and five will be home to an exhibition that showcases the innovations throughout Audiâs 100-year history.